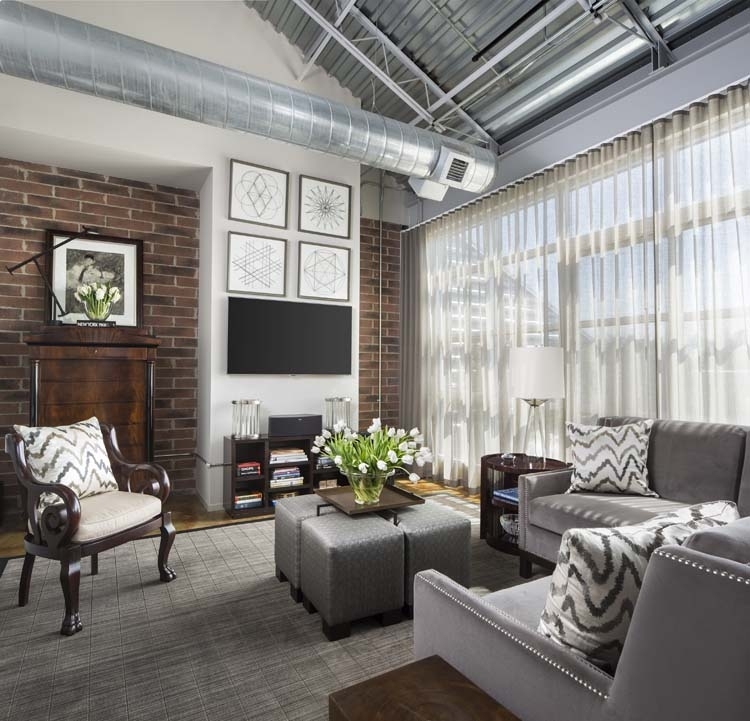 I was thrilled to work with Richard Ross on the window treatments and pillows in the living room of his Royal Oak industrial loft home.  Please read the article included here from the June-July 2017 issue of Detroit Home magazine.   Original article titled Amazing Gray linked here.  Photos by Beth Singer.

From the expansive outdoor terrace, the sounds of nearby I-696 provide a constant hum outside of Richard Ross’ Royal Oak Industrial loft. Inside, however, all is quiet — save for Stevie Wonder and Michael Jackson crooning softly on the radio.

HOMEOWNER RICHARD ROSS AND JUAN CARLO TAKE IN THE BEAUTY OF ROSS’ LOFT.

When he purchased the 1,600-square-foot top-floor space, it was divided into a living room, kitchen, a first-floor suite, a den with a bath, and an upstairs master suite. Ross converted the first-floor bedroom into a family room, removing a door and partition to open the space to the rest of the main floor’s living area. Otherwise, he redefined spaces without renovating them — converting a small office near the entry to a mudroom and transforming the first-floor bedroom closet into an entry off the powder room. He also removed large vertical blinds in favor of softer gray linen sheers, upgraded appliances, and added a kitchen backsplash.“I wanted to create a space that would feel larger than it actually is,” he explains. “I wanted people to come in and want to sit down and hang out.”

His goal for the interior design was to embrace the loft’s industrial soul, but amp up its elegant feel. “I liked the idea of the contrast of refined things in a raw space,” he says. “I think it makes it a little more sophisticated than a typical loft, with all contemporary furniture.” A gray tone on all the interior walls — Benjamin Moore’s Cumulus Cloud — was chosen to blend and harmonize with the dark browns in the deft mix of modern and traditional furniture, as well as the browns and reds in the exposed brick. “Gray is a good bridge,” Ross says. “This is a much warmer gray than the metal roof or I-beams, but it complements them and the two colors work together. The color also helps the artwork really pop.”

GO WITH THE FLOW  ABOVE LEFT: THE BAR AREA. RIGHT: ROSS CONVERTED THE FIRST-FLOOR BEDROOM CLOSET INTO AN ENTRY OFF THE POWDER ROOM.

He filled the two-story space with things that are important to him, following the advice he gives clients. Things that made the cut include Kaiser Suidan ceramics and artwork by College for Creative Studies students, including a large oil by CCS alum Craig Giera that’s showcased in the living room. In the entry, an arresting and oversize black-and-white portrait by local fashion photographer Boswell greets visitors. The furniture is a mix of modern and vintage, including a Finnish Art Deco sideboard outside the first-floor bath, a Ralph Lauren “Thoroughbred” dining table with Donghia chairs, and custom sofas Ross designed. Upstairs, the master bedroom includes a bed by French furniture company Philippe Hurel, mixed with accessories and bedding by Ralph Lauren. “Everything I have here is part of my personal collection; there’s very little I’d give up,” he says. “These are the things I want to live with for a long time.”

COLOR CONSISTENCY   ROSS’ MASTER BEDROOM IS AWASH IN BENJAMIN MOORE’S CUMULUS CLOUD. HE USED THE SAME COLOR ON ALL THE INTERIOR WALLS OF HIS HOME BECAUSE IT BLENDS AND HARMONIZES WELL WITH THE DARK BROWNS IN HIS MODERN AND TRADITIONAL FURNITURE.

Ross admits to missing his Ferndale home’s finished lower level, and sometimes yearns for the privacy that goes with a single-family home. “I loved my old theater room and the pool table,” he says. “A loft is a shared environment, so you have to deal with other people more than you would in your own home. Sometimes that’s good, sometimes it’s not.”

It took a while to make the shift, he says. “At first I didn’t like the open floor plan, but I grew into it.” One of its pluses, he says, is the long outdoor terrace, which almost doubles the available space for entertaining.

While it’s one of the best parts of his new home, Ross admits that the terrace was a design challenge due to its size.

“I had to work hard to make it feel cozy and comfortable,” he says. He accomplished that by dividing it into different zones, punctuated by custom planters and seating areas. He enjoys the terrace from May through October, and often sits outside with Juan Carlo, watching the sky change at various times of the day. “I can see sunsets and sunrises all year long,” he says. “It’s really beautiful. In the summer, the trees fill in and you can barely see the surrounding houses.”

Ross also enjoys the sound of the rain on the metal roof and says the hum from the freeway doesn’t bother him. “It’s sort of cool,” he says. “Sometimes it sounds just like the ocean or waves in the distance.”

MEET ME ON THE TERRACE TOP, A CHIC KITCHEN OPENS TO THE BAR AREA AND GREAT ROOM, WHICH FEATURES A LARGE OIL PAINTING BY CRAIG GIERA. DESIGNER RICHARD ROSS EXPLAINS THAT THE GRAY TONES USED THROUGHOUT HIS HOME WORK WELL WITH THE BROWNS AND REDS IN THE EXPOSED BRICK. BELOW, THE LONG OUTDOOR TERRACE ALMOST DOUBLES HOMEOWNER RICHARD ROSS’ ENTERTAINING SPACE. TO MAKE THE SHAPE WORK, HE DIVIDED IT INTO DIFFERENT ZONES, PUNCTUATED BY CUSTOM PLANTERS AND SEATING AREAS. SEE HOW THE DESIGNER ENTERTAINS HERE IN THIS ISSUE’S THIS SEASON DEPARTMENT.

Do you have any Questions?

If you have any questions or comments, we’d love to hear from you! Send us a message below, shoot us a direct email at info@transitionsdrapery.com or give us a call at 586-286-3640 or send us a message through our contact form.

You were expert in taking the drapery from my old home and transforming them to fit our new house. Not an easy task! The valences look fabulous – with their custom cushions pulling it all together. Results: Awesome!

I so appreciate you taking all the design elements off my hands. I gave you such vague direction, and yet you were able to provide me with exactly what I wanted. The rooms look great. Thank you so much.

When we did the drapery in the master bedroom, I never thought custom bedding could add so much more.
The results are beautiful! I thought we were at a ’10’ before – NOW we are at a ’10’ – and some!

You have done a beautiful job with this client. Truly. Your professional attitude and all your very hard work…the results are extraordinary and I so appreciate your talents.